Abstract
Several recent works show structurally and functionally dynamic contacts between mitochondria, the plasma membrane, the endoplasmic reticulum, and other subcellular organelles. Many cellular processes require proper cooperation between the plasma membrane, the nucleus and subcellular vesicular/tubular networks such as mitochondria and the endoplasmic reticulum. It has been suggested that such contacts are crucial for the synthesis and intracellular transport of phospholipids as well as for intracellular Ca2+ homeostasis, controlling fundamental processes like motility and contraction, secretion, cell growth, proliferation and apoptosis. Close contacts between smooth sub-domains of the endoplasmic reticulum and mitochondria have been shown to be required also for maintaining mitochondrial structure. The overall distance between the associating organelle membranes as quantified by electron microscopy is small enough to allow contact formation by proteins present on their surfaces, allowing and regulating their interactions. In this review we give a historical overview of studies on organelle interactions, and summarize the present knowledge and hypotheses concerning their regulation and (patho)physiological consequences. 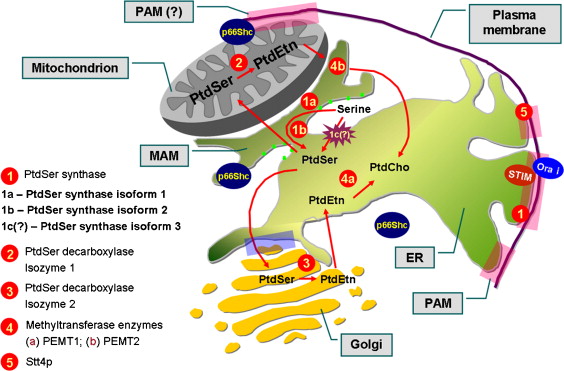 Fig. 2. Schematic view of interorganelle phospholipid transport and phosphatidylcholine synthesis shown as a composite of reactions occurring in both yeast and mammalian cells. PtdSer is synthesized in the ER and MAM by isozymes of PtdSer synthase (1a, 1b and 1c). The PtdSer can be transported to the mitochondria or to the Golgi compartment. In mitochondria or in the Golgi the PtdSer is decarboxylated by PtdSer decarboxylase (isozyme 1) or (isozyme 2) respectively. The PtdEtn formed can be exported to the ER where it is methylated to the phosphatidylcholine (PtdCho) by the methyltransferase enzymes (PEMT1 and PEMT2). Some characteristic proteins were highlighted: p66Shc (found in cytosol, mitochondria, MAM and PAM), STIM and ORAi that interacts in PAM region. Possible contact sites between organelles are marked in pink. For details see corresponding paragraphs. PtdSer, phosphatidylserine; PtdEtn, phosphatidylethanolamine; PtdCho, phosphatidylcholine.