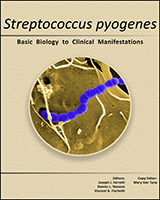 Streptococcal diseases have been recognized in recorded history for over two thousand years and remain today as a serious cause of worldwide health problems. Early research revealed that the streptococci were not only among the first organisms thought to be the cause of contagious diseases, but their presence initiated the introduction of cleanliness and the use of sterile procedures into hospital settings. More recent research on streptococci demonstrated that the hereditary material was DNA, paving the way to present day molecular and genomic studies. This book is focused on one of the streptococci, Streptococcus pyogenes (the group A Streptococcus), the bacteria responsible for diseases, such as scarlet fever, pharyngitis, impetigo, cellulitis, necrotizing fasciitis and toxic shock syndrome, as well as the sequelae of rheumatic fever and acute poststreptococcal glomerulonephritis. The goal of the 30 chapters in this volume is to present an up to date and comprehensive review of research on this organism, including its basic biology, epidemiology, genetics and pathways that facilitate group A streptococcal infections. Our intention is that this information will provide an important resource for the general public, students, researchers, and clinicians in future work towards an understanding of the mechanism of Streptococcus pyogenes disease, in hopes that it will lead to better methods of disease control.